Home Better Showering How to Clean a Shower Head: Neat Tricks and Tips

There’s nothing like a hot shower. But sometimes, you look up and think, gross. I should figure out how to clean a shower head. It seems dirty, and now you’re wondering if all the dirt is harboring germs and bacteria. Instead of getting clean, you start to think you are making yourself dirtier!

It might seem like a daunting task. Either you have to hold your hands up and drip cleaning solution everywhere or climb up on a stool in your shower and try to clean the shower head without falling down. You might think it’s better to hire a plumber or professional maid service for this task. However, it’s really not as hard or as messy as you might think.

Why Does My Shower Head Get Dirty

You’re probably wondering how the shower head even gets dirty. After all, it’s just a nozzle that sprays water. So what’s going on? Well, it turns out that all shower heads get dirty over time. And, it has nothing to do with the type of water you use. Whether it’s water from a lake, water from a well, or city water, there are going to be microscopic particles and minerals that end up collecting on your shower head.

All of this accumulated debris creates a fertile environment that encourages the growth of mold and bacteria. The University of Colorado conducted a study that concluded that about 30 percent of shower heads contain potentially harmful bacteria. Learning how to clean a shower head will help you hinder that growth.

Can I Stop My Shower Head from Getting Dirty

There’s no way to prevent a shower head from getting dirty (unless you switch to baths). However, there is some research that says if you buy an all-metal shower head instead of one with plastic parts, you are more likely to reduce the amount minerals and debris that accumulates on the shower head.

What Should I Avoid

Before we tell you how to clean a shower head, let’s talk about what you shouldn’t do. While it seems like brute force would be the most effective way to clean your shower head, that isn’t what most experts recommend.

For example, bleach seems like the obvious cleaning solution. It gets things clean and kills germs, right? Well, yes, that’s true, but when it comes to shower heads, there is some research that indicates using a bleach solution to clean in the shower can actually increase the number of bacteria in a shower. Using a hard or stiff brush might also seem like a no-brainer. However, depending on the finish of the shower head, you run the risk of scratching and ruining it.

How to Clean a Shower Head

There are many ways to clean your shower head. Some rely on natural solutions, while others involve chemical-based cleaners. Most are relatively easy to do, but some are a little more involved. We’ve rounded up some of the best tips and hacks to help you figure out how to clean a shower head easily. 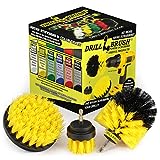 Many shower heads these days have plastic nozzles to help direct the water flow. You can clean these nozzles by rubbing them with your finger. This should dislodge enough dirt and grime that you have a clean shower head again. If, however, rubbing didn’t do the trick, you could use an old toothbrush and some water to gently massage the dirt loose. You could also try a toothpick or the end of a paperclip to gentle loosen anything still trapped in the nozzle.

If you want to know how to clean a shower head with something that’s a household cleaning powerhouse and is also natural, there’s nothing like the cleaning power of vinegar. It’s cheap, and it doesn’t have any chemical fumes to worry about (all though, everything might smell like a salad for a bit). The acid in vinegar does an effective job of breaking down the deposits on the shower head, making it an ideal alternative to chemical cleaners.

You could use vinegar instead of plain water with the toothbrush method mentioned above. But, if you find that rubbing and massaging didn’t work, try a vinegar bath in a bag. The beauty of this method is that it does not require you to remove the shower head from the wall (all though you can if you choose) and you don’t have to do any scrubbing over your head.

If you’ve got stubborn stains, you could try a twist on the vinegar bath by adding baking soda to the bag. How to clean a shower head with this explosive bath: mix one-third cup baking soda and 1 cup of vinegar in the bag. Make sure you do this either over a sink or in the shower as you will immediately get a foaming action when you combine the ingredients. Once the foaming subsides, follow all of the same steps for the vinegar bath.

Whether you call it soda, pop, or even Coke, soda pop is a surprisingly effective cleaning product. Many people use it to clean their toilets and swear by it. The acid in the drink works in the same way that the vinegar acid does. The advantage is that it smells better than vinegar. So, instead of giving your shower head a vinegar bath, try a soda pop bath instead. One word of caution, because soda pop has sugar products in it, make sure you do a thorough job cleaning up after so you don’t have a sticky residue creating clogs in the nozzles or attracting ants.

Soak and wash it in a bucket

If you’ve tried the bath in a bag method and your shower head still isn’t clean, or you’re feeling adventurous, learn how to clean a shower head using the advanced technique of removing the shower head from the wall and washing it in a bucket.

Remove the shower head from the arm. To make sure you don’t scratch the shower head, place a towel or rag over the connection before turning it. Using a wrench, grab the connector and turn counterclockwise. If you aren’t sure how to do this for your particular shower head, consult the manual. If you can’t locate the instruction manual, you can find some general instructions online.

Clean off the filter screen

Chemical based products claim that they can do the same thing in less time than vinegar or other natural cleaning products. You can usually spray the product on the shower head and let it sit for 20 to 30 minutes before wiping the shower head clean. Or, you can use liquid products to give your shower head a bath.

One note of caution. Most manufacturers advise against using chemical-based cleaners on their shower heads. Many chemical cleaners may damage the shower head’s finish.

How Often Should I Clean a Shower Head

Try to do a deep clean of the shower head at least once a month. Regular weekly cleanings are one of the most effective ways to keep dirt and grime from building up between deep cleanings. A daily shower spray is quick and easy. You could use a vinegar and water solution or a chemical product designed specifically for daily use in the shower.

Turning on the bathroom fan during or after a steamy shower helps a lot, too. The humidity generated by the shower encourages mold and mildew growth everywhere. If you have hard water, consider installing a water softening system. This can help decrease the mineral deposits in your water supply.

Final Thoughts on How to Clean a Shower Head

Consider These Available Shower Heads For You 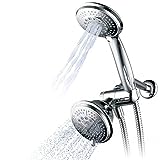 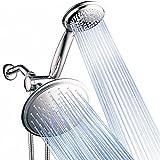 What Exactly is an Indirect Water Heater?