You’re fed up with the way your old shower head is (or rather, isn’t) working. Water sprays in every which direction, and its pressure is just terrible. You also may not know where to start looking for a new one. If you live in the Midwest, Menards shower heads might serve your purpose very well.

Menards is a chain of big box home improvement stores like Home Depot and Lowe’s. They have over 300 stores across 14 states, primarily in the Midwest. Founded as a family company in 1958, they advertise themselves as committed to quality, with skilled employees in their stores ready to help customers with any questions or concerns they may have.

They carry brand-name products across a variety of departments, and they sell their own in-house brands as well. Those include Midwest Manufacturing, Tuscany, Tool Shop, Mastercraft, Dakota, and more. They also carry name-brand appliances, lawn and garden supplies, and even pet supplies and a limited selection of non-perishable groceries.

What Are Menards Shower Heads?

​Some of the most well-known brands reside at Menards. Their most popular shower heads include:

​They also have some less well-known brands, including:

How big is Menards selection of shower heads?

There are several other brands not named above because Menards only sells a few of those brands’ products. All the same, their selection of shower heads is pretty significant. If you decide to buy a shower head from their website, you have nearly 400 options from which to choose. Menards is certainly not wanting for variety.

You might be thinking, “Oh look, another big box store. Tell me why I should buy a shower head here?” We can’t tell you that, but we can tell you what kind of store Menards is according to other people.

Customer opinions on selection and quality

Menards' most desirable quality is the number of shower heads available on its website. However, we were unable to find reviews on specific shower heads at Menards, since the company doesn’t allow product reviews on its site anymore.

We were able to find customers’ experiences with shopping at Menards, however, and the reviews are mixed. Some people like Menards’ rebate program and discount prices. Their 11 percent sales seem to be a favorite among various shoppers and people who rehab houses for a living. Many people also like the help they get from store associates.

Another thing that customers find favorable with Menards is their ability to special order something for you at a reasonable price.

Other customers will only shop at Menards for certain things, and go to other stores for other things. One customer even stated that they prefer Menards for electrical equipment, but not for plumbing.

Furthermore, Menards advertises itself as customer-oriented, but there are a lot of complaints from customers having problems with the quality of some Menards products. When they contacted Menards for help, they found that Menards often doesn’t stand behind the products they sell. Getting them to help with a return or replacement can be a nightmare, too.

Unfortunately, the Better Business Bureau has given them an “F” rating for now. Customers have lodged over 600 complaints against them over the last three years, and only managed to resolve 89 of them. Menards is not a BBB-accredited company, but the complaints stand regardless.

Obviously, Menards is not the only place from which you can buy shower heads. Most home improvement stores will have at least a limited selection of shower heads available. How do Menards shower heads compare to everyone else’s?

Home Depot's selection of shower heads vastly exceeds that of Menards, too, at least online. If you just run a search for "shower heads," in the "bath" category, you'll get nearly 3,000 results. Many of those results are shower accessories like handles, arms, hoses, and faucets, but most of them are actually shower heads. In fact, Home Depot sells over 80 different brands of shower heads and accessories, compared to Menards' 24. Home Depot's lineup includes Moen, Delta, American Standard, Kingston Brass, ANZZI and Pfister, among a plethora of others.

Home Depot sells shower heads but that doesn't include fancy fixtures and full showers, but it does show that you have more choices for less money.

Customers like the expertise Home Depot's associates show. Some mention their skill in matching paint colors (to things other than free paint chips), while others say that associates were able to help them think about aspects of their projects they had never even considered. Despite that, Home Depot has some downsides. The most common complaint about them seems to be home delivery. There are widespread problems with people receiving damaged merchandise and having problems getting Home Depot to rectify the situation. Regardless, the Better Business Bureau gives Home Depot an A- right now.

Another well-known chain of big-box home improvement stores, Lowe's has been around since 1946 and is currently the second-largest home improvement retailer in the world. As its sales grew, its owner, Carl Buchan, expanded throughout western North Carolina and into neighboring states. However, Lowe's didn't become a big-box store until the mid-1990s, when the company ditched little neighborhood stores and began building stores 85,000 square feet and larger.

Comparing Menards shower heads to Lowe's, it has a massive selection of shower heads as well. If you run a search on Lowe's website for "shower heads" you'll get nearly 2,000 results. At a total of 40 brands, don't have nearly as many as Home Depot, but they do exceed Menards by a fair margin. Like both Menards and Home Depot, Lowe's sells Moen, Delta, Pfister, and American Standard. They also have Kohler, which is a very popular brand, and many other lesser-known brands.

Out of the 3 companies we've discussed so far, Lowe's has the best prices for small, simple shower head. However, they also sell some very high-end shower heads, like the kind you might find in an upscale hotel. In general, though, you can expect to pay a hefty price for a shower head from Lowe's.

Customers say that Lowe's employees have more expertise in their areas than associates at other companies, particularly when it comes to complicated jobs such as kitchen remodels. Many have nothing but good things to say about Lowe's when it comes to resolving problems, too. However, some say that Lowe's customer service has gone down the drain over the last several years. A few have also had issues with on-time delivery and getting in touch with Lowe's over it. The Better Business Bureau gives Lowe's an A+ overall.

ACE Hardware's stores are so small compared to the big-box retailers that some might wonder why they're even still around. When you search their website for "showerheads" (one word), you only get 130 results. Not all of them are shower heads, either. Some of those products are accessories and fittings, rather than shower heads themselves. So how does ACE Hardware even stay around? Well, bigger and more aren't always better. People who prefer ACE to the big-box stores like the fact that things are easy to find and the employees are more knowledgeable and friendly. In short, ACE feels more personal than Home Depot, Lowe's, and Menards. ACE has been on top of JD Power's product and customer service rankings for years.

Comparing Menards shower heads with ACE's offerings, they carry 21 different brands of shower heads: including Moen, Delta, American Standard, Pfister, and even Kohler. People like ACE so much that it only has 33 complaints with the Better Business Bureau, and enjoys an A+ rating. That's in comparison to the thousands that Home Depot and Lowe's both have. Menards can't even compete when it comes to BBB ratings; as we noted above, they've got an F.

Bed, Bath and Beyond

Bed, Bath and Beyond is different from the rest of the companies here in that the company's focus is mostly on furnishings and textiles for your bedroom, bathroom, and kitchen. Since its inception in 1971, the company has grown to operate under several different names depending on which market segment they target. Since "bath" is part of their name, though, they do sell shower heads. Their selection is close to that of Menards shower heads, with over 350 different shower heads across 23 brands available on their website. Those brands include Moen and Delta, like the stores above, along with American Standard, Kingston Brass, and Kohler.

The major downside to buying a shower head at Bed, Bath and Beyond is that they're a little more expensive than they are at the above retailers. Their cheapest shower head still quite pricey, compared to the shower heads at the other stores, including Menards. They sell their fancy spa systems at roughly the same prices as everyone else.

We looked at Menards shower heads on their own website and compared that information to what Home Depot, Lowe’s, and ACE Hardware have available. For customer opinions, we used the review site Consumer Affairs, and went to message boards and the Better Business Bureau’s website to get a good picture of real user reviews.

​Given the variety of Menards shower heads available, you may well find one that’s perfect for you despite the problems with the company. Whether you shop online or in a brick-and-mortar store, you'll likely be able to find a shower head that suits your needs well. However, the truth is that you may have a better time with Lowe's or Home Depot shower heads than you will with Menards shower heads. 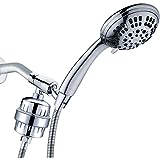 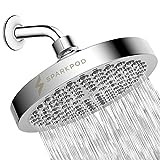