It's time. You woke up this morning, jumped in the shower, and by the time you were done running under the few dribbles from your shower head to get wet, soaped, and rinsed, you were ready to go back to bed. New plan for Saturday -- replace the shower head. A Moen shower head offers you many features that will improve your shower experience and look great in your bathroom.

Moen has been making products for more than 75 years. In 2000, they created the first vertical spa experience. They still hold to their mission statement, they're “dedicated to designing and delivering beautiful products that last a lifetime – all over the world.”

Features and specifications common to all Moen shower head include:

Some Moen shower head choices include:

Where to buy a Moen Shower Head

You can buy a Moen shower head from the Moen website, Amazon, and Wayfair online. You can also purchase them at retailers such as Home Depot, and Bed, Bath, and Beyond.

Price of a Moen Shower Head

The price of a Moen shower head can vary depending on which retailer you select.

How We Reviewed Each Moen Shower Head

We researched the Moen line to show you their wide variety of products. We reviewed each shower head by checking out customer ratings, as well as the price and features. The list below was created to help you choose the Moen shower head that is right for you.

There are too many Moen shower heads to name them all. We've highlighted some of the best to help you pick a shower head that fits your budget and style. 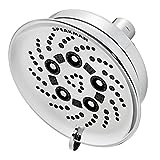 The Velocity Chrome Spray Head Rainshower allows you to have more control over your shower experience. A flip of a lever gives you two options of a calming rain rinse or a self-pressurized spray. If you are worried about style, the highly reflective chrome finish offers a mirror-like look that goes well with any decorations in your bathroom.

You don’t have to worry about wasting water with this Moen shower head, either. This eco-performance shower head conserves water without sacrificing any performance.

Customers gave this Moen shower head high praise with 4.8 out of 5 stars on Moen’s website, while at Home Depot it received 4.7 out of 5 stars. Many customers said tall people could stand under it with no problem. Others stated that it is a well-built product.

Some customers stated that this shower head is only for looks and doesn’t do a good job of washing their hair, while others complained that it doesn’t offer enough water pressure and that it’s not worth the money. 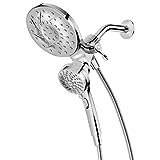 The Engage Magnetix Chrome Handshower/Rainshower is available on the Moen website and Amazon. With features inspired by the patterns found in nature and its sleek mirrored style, it fits in well with any décor. The Moen shower head comes with a magnetic-mounted handshower for easier rinsing.

The Magnetix™ technology features an innovative magnetic docking system, keeping this shower head secure. Six-functions, including soothing massage, downpour, and broad coverage, as well as rinse and massage, pause, and relaxing massage are available at the push of a button. You will have no trouble finding a water pressure setting that fits your mood.

One customer gave this Moen shower head a 1.0 out of 5 stars on Moen’s website because it broke after only a few weeks of use.

However, other customers gave it praise and a rating of 3.8 out of 5 stars on the Moen website. Customers gave it an even higher rating of 4.8 out of 5 stars on Amazon. Some said that it is a great shower head for the price and the different options that come with it make showering a lot of fun. Many other customers stated they love that it has both a handheld shower option for shorter people and a rain shower option for taller people. Many also indicated that they liked the fact that the magnetic shower head has a strong hold on the shower head base and doesn’t fall off of it. 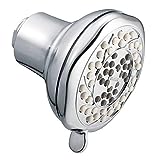 The Enliven Chrome Spray Head Wallmount had high ratings of 4.3 out of 5 stars on the Moen website, while on Amazon, it was rated even higher with 4.6 out of 5 stars. Customers said it had excellent water pressure, and fit in with their style. Others said they had no trouble installing it, and the different spray options were enjoyable. Others commented that this Moen shower head is inexpensive and works great.

Some of the top complaints from customers included comments that this Moen shower head had poor quality. Others said the holes in the shower head are too large which causes them to lose hot water quickly. Some customers even labeled it as a downgrade from their old shower head.

This Moen shower head offers three spray settings that give you an awakening showering experience. This shower head is available on Amazon and the Moen website.

The Banbury Spot Resist Spray Head comes with a subtle design that is elegant and timeless. The spot resistant nickel helps you avoid fingerprint smudging and water spots for a cleaner looking bath. This Moen shower head has a five-function combination spray for more variety whenever you need it. There is also a handheld shower for easy rinsing.

The kink-free metal hose that comes with the handheld shower is flexible and easy-to-use. It is available on both Moen’s website and Amazon.

Customers praised this Moen shower head. They gave it a 3.7 out of 5 stars on Moen's website because of its looks and solid construction. Others commented that the spray pattern on both the shower head and the handheld are perfect. On Amazon, it received a higher rating of 4.2 out of 5 stars with 57 percent of customers giving it the full five-star rating. Customers said it was easy to install and that it was the best shower head ever.

Customers that left negative reviews stated that this Moen shower head looks nice but that it has a poor design. Some customers also said that installing this shower head became more of a project than they expected. Some even commented that it was impossible for them to hang the sprayer. Others noted that the shower head leaks. 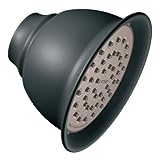 The Moen Eco-Performance Shower head is available on Amazon and other online sites. The Matte black finish is the perfect complement to modern spaces. The LifeShine finish won't tarnish, corrode, or flake off, and they guarantee it. This eco-performance shower head conserves water without sacrificing any performance.

On Moen's website, one customer complained that it is, “too eco-friendly for a tankless water heater” and that the water heater doesn’t even register when the shower is turned on. They didn’t like that they have sporadic hot and cold water at the same time. 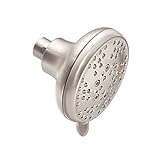 The Refresh Spot Resist Spray Head Wallmount has excellent features such as a fingerprint and water spot resistant Brushed Nickle finish. The finish provides a cleaner looking shower. A five-function combination sprayer offers you a variety of choices each time you shower.

Customers gave this shower head high praise, gracing it with 5.0 out of 5 stars on both the Moen website and Amazon. Some customers said that it is a great product, and easy to assemble. A customer with a well stated that the water pressure in his shower stays consistent. Some customers enjoyed the fact that the Brushed Nickel coating on this Moen shower head matches the coloring of their other fixtures perfectly. There are no negative reviews of this product. 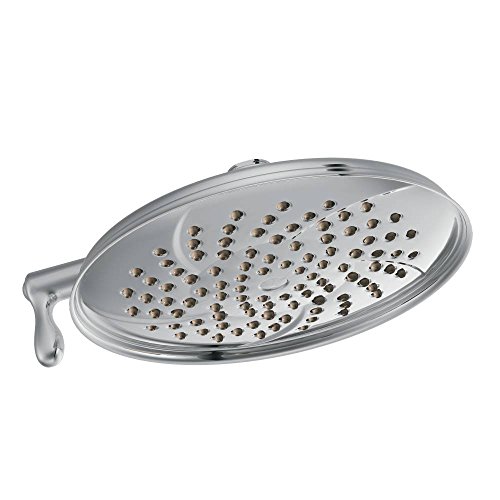 The Isabel Chrome Spray Head Rainshower is designed to make your life even more simple. The two-function rainshower allows you to change from a full rainshower to a more vigorous rinse with the simple turn of the nozzle. This Moen shower head has a chrome finish to give it a nice mirrored look.

The advanced, self-pressurizing Moen Immersion™ rainshower technology channels water through the shower head with three times more spray power than other rainshowers. This technology gives you a more thorough rinse each time you shower. It is available on the Moen website and at Home Depot.

This shower head received only one complaint, with the customer claiming that the water pressure was too soft.

Many other customers had high praise for this shower head. It received 4.8 out of 5 stars on the Moen website. At Home Depot it received 4.7 out of 5 stars. Customers stated that it improved their water pressure and offered them a thorough shower. Some said it was amazing, perfect and awesome, while others commented that it gave them a spa-like feeling each time they used it.

How Moen Shower Head Compared to Other Brands

The Kohler Flipside Multifunction Shower Head has Flipstream Technology and is much like the Moen Refresh Spot Resist Spray Head. It dedicates four unique sprays, including Koverage, Kotton, Komotion and Kurrent spray patterns which make it suitable for any bathing necessity. The shower head even rotates 360-degrees.

The premier finish coating will resist the corrosion that comes with everyday use. This shower head gives you an invigorating shower experience. There is also a lifetime limited warranty available with it. It is available on the Kohler website and at Home Depot.

Customers complained the swiveling shower head got their walls wet and that the shower head moved too much. Some stated that this shower head from China had a plastic feeling to it. Some said they needed to remove some parts of the shower head to get added water pressure. 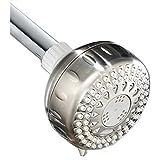 The TRS-529 PowerSpray+™ Shower Head is like the Banbury Spot Resist Spray Head because it also has five functions to offer you. This shower head provides proof that you don’t have to pay more for quality. It is sleek in style. The functions of the shower head range from relaxing, to full-body spray, to high-pressure massage, to OptiFLOW® technology, for more water force. The metal face with an anti-clog rubber nozzle cleans up quickly, too.

Many customers gave it high ratings of 4.0 out of 5 stars on Amazon with 63 percent of customers giving it the full five-star rating. Many customers gave this shower head praise because it was easy to install and that it's available for a great price. One customer even said it was “life changing” because they were able to wash their hair with good water pressure.

Some of the complaints that topped the negative comments section included the nozzles of the shower head not working well enough. Some customers even stated that the nozzle on this shower head is only good for watering plants and not for taking a shower.

The SR-124 Assana Anystream Multi-Function Shower Head is like the Banbury Spot Resist Spray Head offering five distinct spray settings. With this shower head, you get a unique transitional design with a corrosion resistant chrome finish.

Unlike any of the Moen shower heads, it can give you 149 individual sprays. This product includes a lifetime limited warranty. This shower head is available on Amazon and at local retail stores.

Receiving 4.9 out of 5 stars on Amazon, an incredible 91 percent of customers gave it the full five-star rating. Others also gave it 5.0 out of 5 stars at Home Depot. Many stated that it is wonderful, easy to install, and easy to operate. Many also commented that it is a great deal. There are no negative reviews of this shower head.

The Right Moen Shower Head for You

Our first choice for a Moen shower head is the Enliven Chrome Spray Head Wallmount. We chose this one because of its features, high ratings, and the price. It is priced lower than some of the other Moen showerheads, which makes it a great choice if you're on a budget.

Our runner-up choice for a Moen shower head is the Refresh Spot Resist Spray Head Wallmount. You can buy it even if you're on a budget with its low price. The features of this showerhead are highly recommended by customers, too.

Which Moen shower head would you like to try? Let us know in the comments.